Your Guide to Becoming the Authority in your Domain

A concept map is a diagram showing the relationships among concepts. It is a graphical tool for organizing and representing knowledge.

Concepts, usually represented as boxes or circles, are connected with labeled arrows in a down­ward-branching hierar­chical structure. The rela­tionship between concepts can be articu­lated in link­ing phrases such as "gives rise to", "results in", "is required by," or "contributes to". [1]

The Unified Modeling Language (UML) is a formal system for designing such diagrams.

A concept map is a way of representing relation­ships between ideas, images, or words in the same way that a sentence diagram represents the grammar of a sentence, a road map represents the locations of highways and towns, and a circuit diagram represents the workings of an electrical appliance. In a concept map, each word or phrase is connected to another and linked back to the original idea, word or phrase. Concept maps are a way to develop logical thinking and study skills by revealing connections and helping students see how individual ideas form a larger whole.[2]

Concept maps were developed to enhance meaningful learning in the sciences. A well-made concept map grows within a context frame defined by an explicit "focus question", while a mind map often has only branches radiating out from a central picture. There is research evidence that knowledge is stored in the brain in the form of productions (situation-response conditionals) that act on declarative memory content which is also referred to as chunks or propositions.[3][4] Because concept maps are constructed to reflect organization of the declarative memory system, they facilitate sense-making and meaningful learning on the part of individuals who make concept maps and those who use them.

Concept and topic maps often make connect connections with graphs or algorithms; mind mapping often use radial hierarchies and tree structures. Among the various schema and techniques for visualizing ideas, processes, organizations, concept mapping, as developed by Joseph Novak is unique in philosophical basis, which "makes concepts, and propositions composed of concepts, the central elements in the structure of knowledge and construction of meaning."[5] Another contrast between Concept mapping and Mind mapping is the speed and spontaneity when a Mind map is created. A Mind map reflects what you think about a single topic, which can focus group brainstorming. A Concept map can be a map, a system view, of a real (abstract) system or set of concepts. Concept maps are more free form, as multiple hubs and clusters can be created, unlike mind maps which fix on a single conceptual center.

Joseph D. Novak used concept mapping in the 1970s to represent the emerging science knowledge of students. [6] It has subsequently been used as a tool to increase meaningful learning in the sciences and other subjects as well as to represent the expert knowledge of individuals and teams in education, government and business. Concept maps have their origin in the learning movement called constructivism. In particular, constructivists hold that learners actively construct knowledge.

Novak's work is based on the cognitive theories of David Ausubel (assimilation theory), who stressed the importance of prior knowledge in being able to learn new concepts: "The most important single factor influencing learning is what the learner already knows. Ascertain this and teach accordingly."[7] Novak taught students as young as six years old to make concept maps to represent their response to focus questions such as "What is water?" "What causes the seasons?" In his book Learning How to Learn, Novak states that "meaningful learning involves the assimilation of new concepts and propositions into existing cognitive structures."

Various attempts have been made to conceptualize the process of creating concept maps. Ray McAleese, in a series of articles, has suggested that mapping is a process of off-loading. In this 1998 paper, McAleese draws on the work of Sowa [8] and a paper by Sweller & Chandler [9]. In essence, McAleese suggests that the process of making knowledge explicit, using nodes and relationships, allows the individual to become aware of what they know and as a result to be able to modify what they know.[10] Maria Birbili applies that same idea to helping young children learn to think about what they know.[11] The concept of the Knowledge Arena is suggestive of a virtual space where learners may explore what they know and what they do not know.

Concept maps are used to stimulate the generation of ideas, and are believed to aid creativity. For example, concept mapping is sometimes used for brain-storming. Although they are often personalized and idiosyncratic, concept maps can be used to communicate complex ideas.

Formalized concept maps are used in software design, where a common usage is Unified Modeling Language diagramming amongst similar conventions and development methodologies.

Concept mapping can also be seen as a first step in ontology-building, and can also be used flexibly to represent formal argument.

Concept maps are widely used in education and business[12]. Uses include:

Example of a concept map from 1957 by Walt Disney 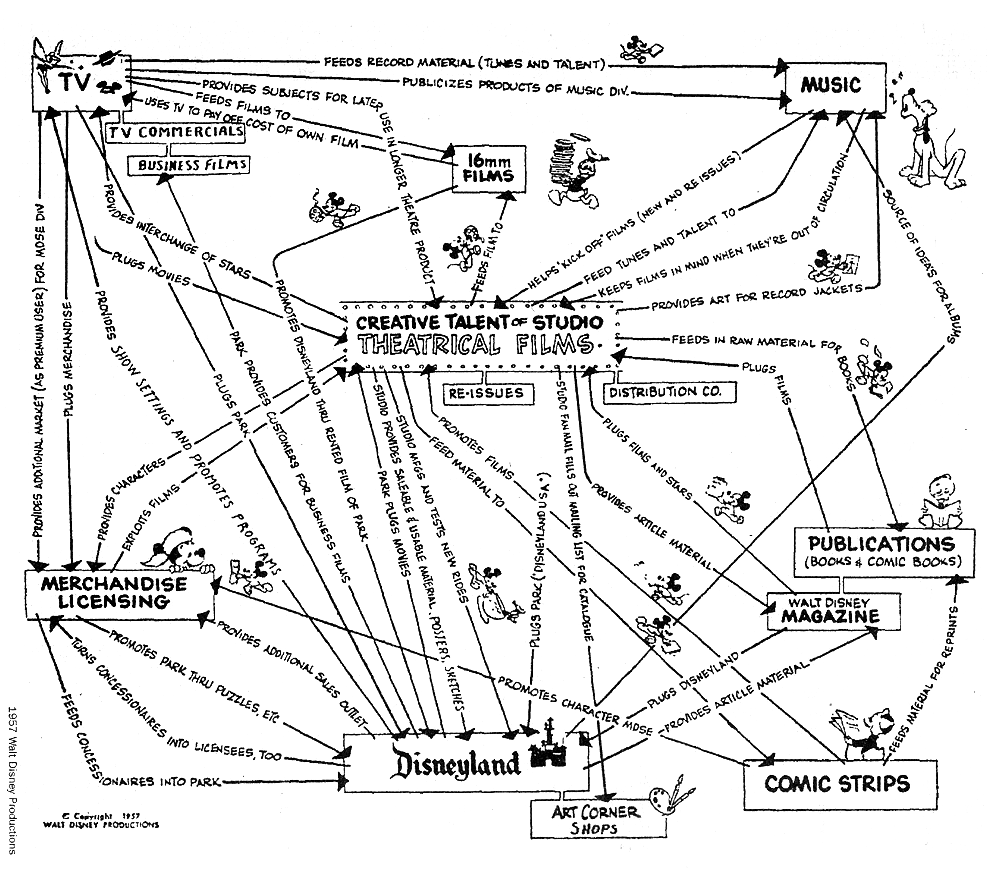